So you’ve got a great outdoor living space? Want to add a focal feature most homeowners don’t consider after they build a fence or a deck? When it comes to backyard structures and features, JJ Fencing & Decks can help. A gazebo is a great addition to a fenced in backyard. You can place one near a pool, attached to a deck, or even on its own in the yard somewhere. A semi-enclosed, covered space is invaluable to those looking to host events, keep the kids corralled, or even spend some time alone outside whilst avoiding the sun or other natural elements. In the following post, JJ Fencing & Decks explains some important knowledge homeowners need to know before they buy their new Gazebo.

What is a gazebo?

When you think of a gazebo, you may picture weddings, barbecues, and family reunions. Although a gazebo may have been present at many of these events, they can also serve as a great feature in your backyard. Whether you’re hosting a barbecue or want a quiet place to read outside, a gazebo may be the option for you.

The structure tends to be separate from anything else. It’s built in an octagon shape. The foundation for the gazebo can be dirt, concrete, or gravel. It all depends on your budget and the placement of the structure, water drainage, and overall appearance.

Typically, the gazebo has railings similar to a deck with one or two entrances, so you can step up into the structure. 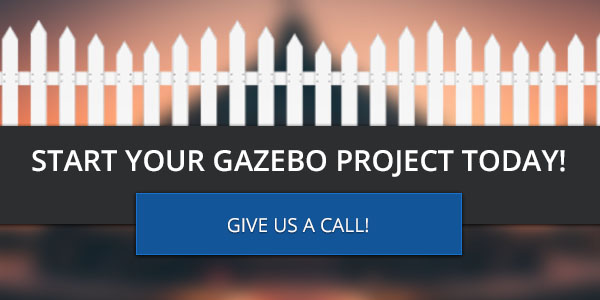 Why build a gazebo?

A gazebo is a great addition to most backyards since it offers more covered space to protect your loved ones from the sun, rain, or snow. It also offers a space to gather for games, drinks, or to rest after spending all day playing in a pool.

A gazebo is versatile in its use, whether you gather with others or claim it as your peaceful getaway from the home.

You can also include a Gazebo attached to or on your deck. What does this look like? Your deck project simply includes the gazebo as a part of its construction. This means you can have your deck extend from your home out to a covered gazebo. This is popular for homeowners with little yard space but still want the feel of a gazebo.

Fire pits near or in gazebos are also a popular option as a backyard feature. Keeping the fire pit and the area around it covered means you and others can be protected from wind and other elements that may intrude on the event.

How does a gazebo affect outdoor living?

It may seem overwhelming when you’re first looking at which gazebo to buy. This is normal. JJ Fencing & Decks recommends you start with how and why you’ll be using the gazebo. If you’re simply looking for extra covered space for your outdoor living, you may want to keep it simple and not include furniture or built-in custom benches. If you intend to host events, use the gazebo for storage, or build a fire pit within the gazebo, you will want to purchase something that will fit your needs.

JJ Fencing & Decks field a common question for first-time gazebo owners: Will my gazebo blow away? In most cases, no. The gazebo is secured to the ground, either with anchors in concrete, or the supporting posts are buried deep enough to ensure structural integrity. Unfortunately, natural disasters can occur, which means your gazebo may take some damage.

With this in mind, sometimes homeowners want to move their gazebos. This is possible, but it can be expensive if the gazebo was originally anchored or secured in place. Consider the benefits of moving the structure. Do they outweigh the cost, or would it be better to build something new or find an alternative?

Umbrella: A simple feature that offers shade and is usually attached to the home or a movable post. A quick and easy solution near a pool or a fire pit.

Cabana: A more complex structure with fully enclosed walls to create a secluded feeling. The structure is usually meant to separate those inside with the others outside—typically near or around a pool.

It’s important to start with what you want to accomplish with an outdoor living structure. Are you simply looking for shade, or do you want a more secluded feeling? Are you building near a pool, or are you simply adding a covered or enclosed space to the yard?

Whether you want a pergola, umbrella, gazebo, or cabana, JJ Fencing & Decks can help. With over a decade of experience serving the Northern Colorado region, including Fort Collins, Loveland, and Windsor, we love to help our customers bring their vision to life.

Give us a call or send us a message online if you have any questions or want to get your project started right away!